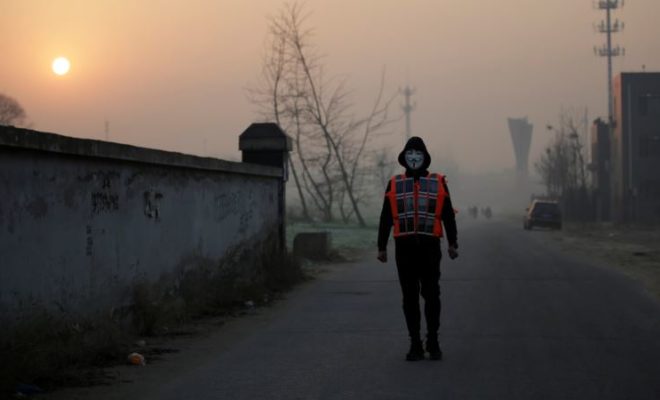 Chinese artist Liu Bolin, known as "the invisible man" for using painted-on camouflage to blend into the backdrops of his photographs, says his latest project aims to put the spotlight on China's air pollution problem. As north China battled with poor air quality for a third straight day on Monday, Liu said the recent pollution warnings inspired him to show live video of the smog in the capital, Beijing. To do that, Liu walks around wearing an orange vest with 24 smartphones attached on the front and back, live-streaming scenes of smog which he calls "a disaster." "As an artist, to discuss it with images is what I think we should do," Liu told Reuters Television. The artist, who is also a sculptor, has won international recognition with exhibitions in Asia, Europe, the Middle East, the United States and Latin America. Liu's previous "Hiding in the City" series featured him hidden in plain sight against monuments, murals, buildings and scenes of daily life in Beijing, Venice, New York and elsewhere. The invisibility theme was done as a protest against the demolition of Liu's studio when authorities razed an artists' village in Beijing. But then he fell in love with this way of presenting his ideas. His latest work is titled "Today Even Numbers Banned," a reference to Beijing's odd-even licence plate system for restricting the number of vehicles on roads when pollution levels are high. China's environmental watchdog issued a five-day warning on Friday about choking smog spreading across the north and ordered factories to close, recommended residents stay indoors and curbed traffic and construction work. Some Beijing residents were puzzled by the sight of Liu and his orange smartphone vest, but they approved of his efforts to raise awareness of the smog problem. "I think this is pretty good. I don't quite understand his art form, but his work can make more people know about smog in Beijing, right?," said 27-year-old Xu Chenglong.