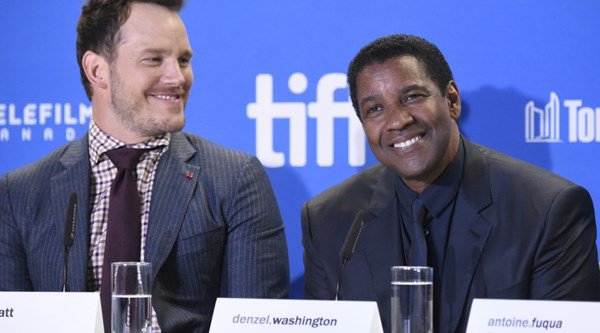 The stars of The Magnificent Seven have defended the recent spate of Hollywood remakes, with actor Chris Pratt insisting it is a result of “merging business and art”.

Denzel Washington, Ethan Hawke and their co-star Chris walked the red carpet at the film’s world premiere on the opening night of the Toronto International Film Festival.

The trio star in a new version of the classic 1960 Western, which featured Yul Brynner and Steve McQueen, and which itself was a remake of the Japanese-language film Seven Samurai.

After a string of recent high-profile remakes or “reboots”, including Ghostbusters and Ben Hur, Denzel insisted revisiting a film that already existed was not why he chose the part.

“The remake part didn’t have anything to do with it,” he told the Press Association.

“It was a chance to be a cowboy in a movie that (director Antoine Fuqua) wanted to make. That’s what was interesting to me.”

Denzel, 61, also confessed he had never watched the 1960 version of The Magnificent Seven, adding: “People would say, ‘oh, you’re the so-and-so character’, and I’d go, ‘I don’t even know who that is’.

“I think it allowed me to do whatever I wanted to do, instead of trying to not do what somebody else did.”

Chris insisted the new version of The Magnificent Seven is a “re-imagining of an older tale” and using the same title would bring a larger audience.

He told the Press Association: “The reason remakes are so popular is because there are hundreds of thousands of movies that have been made. Even coming up with an original title is difficult.

“When you’re merging business and art, you need to find a way of reaching a wider audience.

“More people are going to come and see this movie because it’s called The Magnificent Seven but it’s a completely original re-imagining of an older tale.

“I think you’ve got to get people in the audience, and that’s what we’re going to do, and then you’ve got to deliver them a fantastic movie, which is also what we do.”

Ethan, who previously co-starred with Denzel in Oscar-winning film Training Day, said he believed remakes had “always been popular”.

“There’s never been a time they haven’t been popular,” he told the Press Association.

“Stories build on each other, music builds on the music before it. I don’t think it’s a good thing or a bad thing. I think it is what it is.”

Leonardo DiCaprio will attend the festival on Friday with his environmental documentary Before The Flood, while Ewan McGregor will appear at the premiere of his directorial debut American Pastoral.

The Magnificent Seven is released in UK cinemas on September 23.