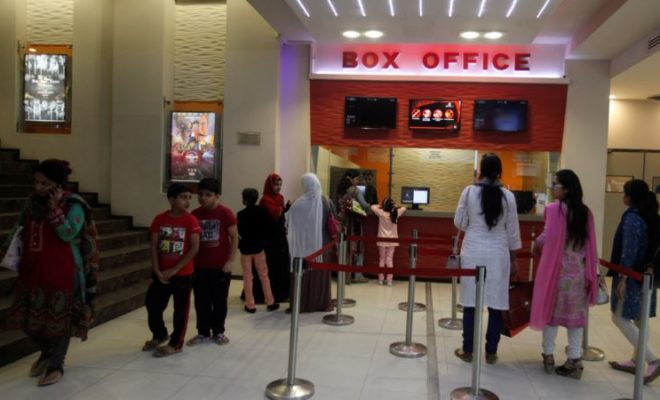 Pakistani movie theaters began screening Bollywood films again Monday, ending an 11-week boycott in response to political and military tensions with India, theater officials said. Some theater owners said the restoration was because tension was easing, but others said it was because audiences had dropped so sharply since the boycott that began Sept. 30. In Karachi, the Atrium Cinema started with a screening of the Indian sports romantic comedy Freaky Ali. Still, the screenings were kept low key, with no publicity posters and scant attendance in theaters visited by Reuters. Relations between the nuclear-armed neighbors and foes have been more fraught than usual since a crackdown by Indian security forces on dissent in Indian-controlled Kashmir began in July. The tension worsened in September after militants killed 18 soldiers in a raid on an Indian army base, an attack New Delhi blamed on Pakistan. After exchanges of fire across the Line of Control in Kashmir — claimed by both countries and occupied in part by each — cinema owners announced the boycott. Pakistan's state censor soon imposed a ban on Indian content and channels on cable television. However, the boycott has cost Pakistani cinemas dearly. "The absence of Bollywood content from theaters resulted in losing over 80 percent of customers," estimated Khurram Gultasab, general manager at Super Cinemas, which runs 10 cinemas in cities across Pakistan's Punjab province. Indian films are popular both at the cinema and on bootlegged DVDs in Pakistan. "If Bollywood films are not resumed, cinemas will be forced to close down," Gultasab said. Nadeem Mandviwalla, whose Mandviwalla Entertainment runs eight cinemas in Karachi and the capital, Islamabad, said the resumption of Bollywood films was a step toward warming relations. "Someone has to take a step toward bringing normalcy back so we have initiated the process to bring back peace and harmony," Mandviwalla said. "As for losses, everyone knows that the suspension [of the boycott] is going to curtail huge losses on both sides." Pakistan's domestic film industry has seen a revival in recent years, but is dwarfed by India's Bollywood. Pakistani actors have increasingly been appearing in big budget Bollywood films in the past few years.