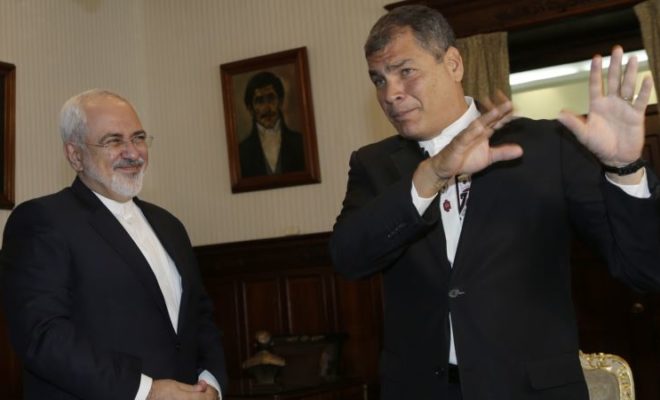 Iran and Ecuador on Wednesday discussed ways that the two countries can strengthen oil prices as Iran signals it may support joint efforts by exporters to prop up flagging crude. Iran has been boosting output since Western sanctions were eased in January. Tehran refused to join a previous attempt this year by OPEC plus non-members such as Russia to stabilize production, and talks collapsed in April. But Reuters reported on Tuesday that sources in OPEC and the oil industry said Iran is sending positive signals on taking joint action, which could help revive a deal on freezing output levels at talks next month. "We have held conversations on strengthening our position in oil markets," Iran's Foreign Minister Mohammad Javad Zarif said through an interpreter after a meeting with Ecuador's President Rafael Correa. Zarif added that the two countries have agreed to continue talks within the framework of OPEC, without providing further details. Ecuador Foreign Minister Guillaume Long said they discussed establishing a common position with regards to strengthening oil prices. Ecuador, OPEC's smallest member, has consistently supported calls by ideological ally and oil price hawk Venezuela to boost crude prices. Since the 2014 collapse in oil markets, the group has remained more focused on retaining market share.