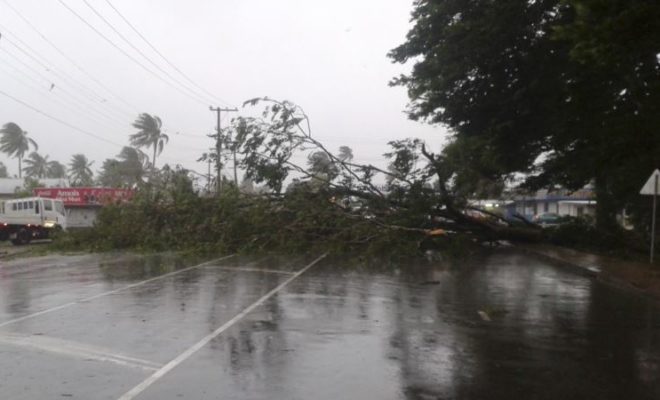 Small Pacific island states could be hit by more tropical cyclones during future El Nino weather patterns because of climate change, scientists said Tuesday. El Nino is a warming of sea-surface temperatures in the Pacific that occurs every two to seven years. The phenomenon can trigger both floods and drought in different parts of the world. Its opposite phase, a cooling of the same waters known as La Nina, is associated with the increased probability of wetter conditions over much of Australia and increased numbers of tropical cyclones. Between 2070 and the end of the century, Fiji, Vanuatu, the Solomon Islands, the Marshall Islands and Hawaii could face an increased frequency in powerful storms during El Nino of up to 40 percent, Australian meteorologists said in a study. However, cyclones may be up to 60 percent less frequent during the opposite La Nina pattern, according to the study published in Nature Climate Change magazine. 'Massive waves' Cyclones bring destructive winds, torrential rain and storm surges that are likely to be exacerbated by rising sea levels caused by global warming, posing a serious threat to Pacific islands, the authors said. "Storm surge … can lead to massive waves propagating far inland, devastating structures and vegetation in its path," co-author Kevin Tory, of Australia's Bureau of Meteorology, told the Thomson Reuters Foundation via email. "Saltwater inundation can also damage soil, leading to years of reduced agricultural yield," he said. Researchers said that in the last three decades of the century, the ocean's surface waters will be hotter than usual in the Western Pacific because of global warming, resulting in more frequent cyclones during El Nino. "These results suggest tropical cyclone activity in these regions will increase in a future warmer climate," another of the authors, Savin Chand of Federation University Australia, said in an email. The latest El Nino, which emerged in 2015 and ended in May this year, resulted in sea temperatures rising to the highest levels in 19 years. Small island developing states are already suffering the impacts of climate change, including rising seas and worsening extreme weather, and have pushed hard for more ambitious international efforts to reduce planet-warming emissions. The Marshall Islands, Fiji and Palau were the first three countries earlier this year to ratify the Paris climate change agreement to limit global temperature rise to "well below" 2 degrees Celsius.