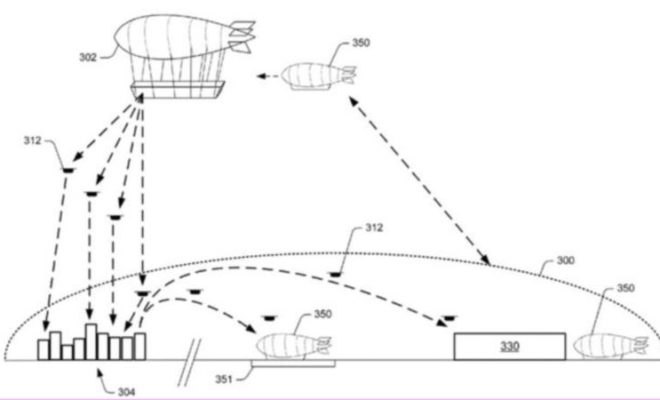 Online retailer Amazon’s aspirations for the use of drones appear to go far beyond individual deliveries by flying robots. According to a patent filing, the company may be looking to develop huge "airborne fulfillment centers" equipped with a fleet of drones capable of making deliveries to individual customers. Earlier this month, Amazon announced the first delivery by drone in a test near the English city of Cambridge. The flying warehouses, according to the patent papers, could allow Amazon to deploy to areas where it expects a large demand for certain products such as at a sporting event where they could be used to deliver souvenirs or food to fans. The patent also says the blimp-like machines could be used to restock warehouses on the ground or transport employees. The centers would hover at altitudes as high as 14,000 meters, the patent filing said. They would then drift lower to release drones to make deliveries. While many companies are exploring drone delivery, they have been hampered by power issues that prevent drones from flying very far. An airborne fulfillment center could potentially help. It's unclear, however, if Amazon will actually pursue the flying fulfillment centers as it has not yet commented on the filing. Many companies file patents that never result in real-world application. The patent was filed in 2014 but recently discovered by Zoe Leavitt of CB Insights, which analyzes trends. Amazon has not commented on the patent. News reports say Amazon won the patent back in April.