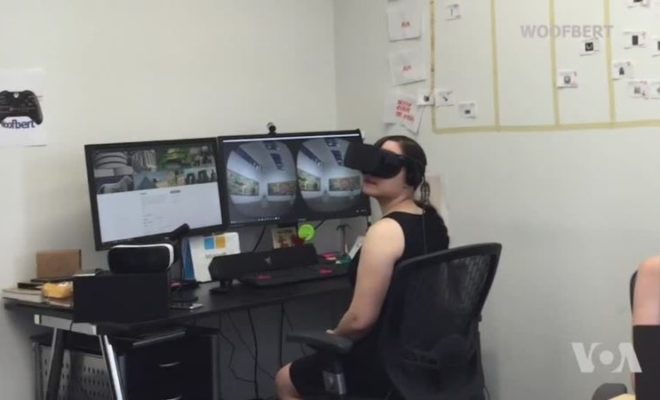 Visiting Art Galleries While Sitting in a Chair

What started as a casual chat between two bankers who shared an interest in technology, art and dogs, turned into a startup dedicated to enabling people visit art galleries without leaving their home. The subject of their conversation was virtual reality, or VR for short, a new technology using sophisticated 3D goggles that trick our minds to think that we are in a different place. Turning our head left and right, up and down, we do not see the edge of the image but a continuation of the space, much as in the real world. Banking manager Robert Hamwee invited Elizabeth Reede to test one of the first iterations of VR headgear, known as Oculus DK1, and 'look around' an Italian villa. She also had a background in banking, but for several years had worked as a curator at New York’s Museum of Modern Art so she did not expect to be impressed. “It blew me away. I mean I was looking at their simulation of what we call the Tuscan Villa Demo and… I just said this is amazing, I've never seen anything like it,” said Reede. Woofbert is Born Soon, Hamwee and Reede founded a startup named Woofbert, with a dog-themed logo, dedicated to virtually opening doors to world-renowned art galleries. “The app is in the Oculus and Gear store,” said Reede. “You download the app, it is a free download and it is embedded with, at this point, with five or six experiences and you choose where you want to visit. You use a Gear VR or Occulus Rift.” Woofbert is accessible to anyone, anywhere, as long as they have one of the VR googles, which in the U.S,. start at $99. The app also works with later models of smartphones. “We say it quite casually but we genuinely mean it, you know, democratizing access to these incredible treasures and then teaching through it,” said Reede. More galleries open virtual doors Currently, users can visit 6 galleries, including London’s Courtauld Gallery and its famous collection of impressionist art, and many others are in the works. Viewers explore the virtual space by moving their head in any direction. Dropping their head calls up a virtual iPad with additional commands. The app also has embedded animations that provide additional information about the displayed artwork. Reede said they plan to connect galleries so viewers will be able to easily step from one into another. “Conceivably,” she said, “you could visit the British museum with Woofbert and then maybe also go to the Natural History Museum in London, or New York, or in DC, and connect those.” Video of the exhibition places are recorded with special, high-resolution cameras, but Reede said the post-production work brings it closer to life. “The real magic occurs with our engineering team, who gets all this massive amount of data and really blends it and stitches it together to give us this realistic feel.” For now, the Woofbert app is free, but when the number of galleries grows, the company plans to start charging a small fee. They plan to add new content every 6 to 8 weeks.