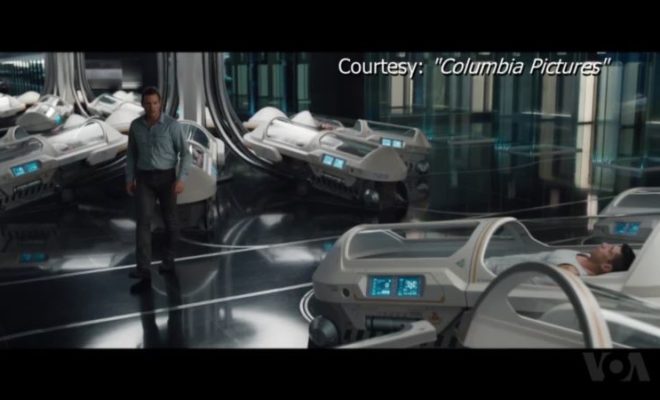 In the new Sci-Fi film Passengers, by Sony Pictures Entertainment, people on Earth are on a 120-year trip to colonize a new planet. But something goes wrong on their way there. Scientists say while much of the movie is a work of fiction, there is some real science behind many of the ideas in it. For NASA scientist Tiffany Kataria, finding a habitable planet is not so farfetched. She studies planets that orbit another star, or exoplanets. “The ultimate goal with studying exoplanets is to really find an Earth twin, to find some other planet out there that’s earth-like that maybe eventually we can colonize some day and explore,” said Kataria. In the film, the passengers travel on a rotating spaceship to create gravity. The idea is not just science fiction says aerospace engineer John Bradford. “That’s one of the main ways we’re going to mitigate some of the challenges and things that come out in microgravity environment damage to the human body in terms of bone demineralization and muscle atrophy. Having this artificial gravity solves those problems, and rotating it is the best way to do it.” But Bradford said current technology is not advanced enough to build a ship as large as the one portrayed in Passengers where it can house thousands of people. “The size of the ship is probably the big challenge, being able to create those large structures. Are you launching those from Earth? Are you building them in space is a big part of the stretch for me. The hibernation and the propulsion aspect and things (are) probably less so,” said Bradford. Bradford’s company SpaceWorks Enterprises is researching hibernation – or human stasis – in space, with the hope that it could be used for human flight to Mars. One of the possible effects of spending time in space and long-term microgravity is intracranial pressure which impairs an astronaut’s vision. Bradford said that’s something human stasis can help, among other benefits. “One of the challenges on the space station that they’re seeing right now is with increased intracranial pressure, and that is causing long-term damage on the astronaut’s vision. So even from a six-month’s stay on a space station, astronauts are having reduced vision when they come back. Actually cooling down the body, reducing the metabolism reduces that intracranial pressure. It’s one of the treatments here on Earth,” said Bradford. Putting humans in a state of hibernation will also reduce the amount of food and oxygen they need. Bradford said his company would first start human stasis for shorter periods of time to see how the body reacts before increasing the time of stasis. “Initially we would maybe cycle through the crew in two-week stints of being in stasis and then they take turns waking up and then inducing the next person, waking them. Those two weeks are within current medical technology. It’s a limited data set, but that has been done before. But ultimately to get the full benefits we want to be able to go to five or six months, and that will take years – 15 years or so, 20 years to really fully understand all the impacts on the crew. But for the shorter stay and the shorter duration, these two-week cycles, we’re optimistic we could be ready to support the first missions to Mars. We've just got to convince NASA,” Bradford said. As for human space fights beyond Mars and our solar system, that is where science ends and the fiction begins. “So the closest planet that we know of, it's actually close to an Earth mass. It's called Proxima Centauri-b. Proxima Cen is 4.2 light years away," said Kataria. “The Juno spacecraft is orbiting Jupiter as 150,000 miles per hour (240,000 kph), so relative to Jupiter if we think about that same spacecraft getting maybe a gravity assist and going to Proxima Centauri b, that would take at that same speed tens of thousands of years. So really the technology still needs to make that leap, I think, to be able to achieve light speed travel or close to light speed travel. “ It may take years for technology to catch up to the imagination, but audiences can still experience the excitement of space travel by going to movie theaters.