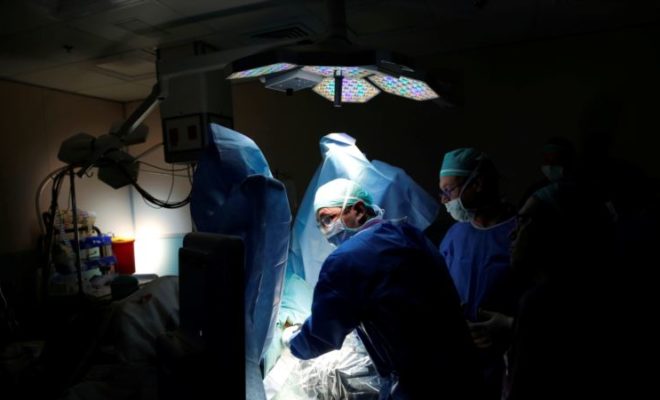 New research shows that light and a bacterium from the bottom of the ocean may provide success in treating men with early-stage prostate cancer. The standard of care for most early, localized prostate cancers is to take a watch-and-wait approach, forgoing treatment unless the disease worsens. But there may soon be another option. Researchers in Britain are experimenting with a form of light therapy, using a laser beam that targets cancer cells and destroys them. In a study of so-called vascular-targeted photodynamic therapy, or VTP, investigators found that nearly 50 percent of patients went into complete remission, compared to 13.5 percent in the surveillance group. Mark Emberton, a professor of interventional oncology at University College London, led the study, published in The Lancet Oncology. Bacterial photosynthesis Treatment involves giving patients an infused drug that sensitizes human tissue to light. Doctors then illuminate the prostate, where the cancer is located. The light activates the creation of oxygen molecules, called free radicals, that cut off the blood supply to the cancer, killing the harmful cells. "This is the effect of light on the photosensitizer, and that releases noxious compounds which are damaging to the cancer cell, but particularly to the blood supply to the cancer cells," Emberton said. The treatment relies on photosynthesis, which is how plants make energy from sunlight. Some bacteria use a similar process. The drug the patients were given, WST11, is made from a bacterium found at the bottom of the ocean. Since there's little light in the murky waters, the microbes are able to very efficiently convert the scant amount of light they do get into energy. Once the drug is injected into patients, the laser light activates the bacterium's photosynthesis, which in turn releases the harmful oxygen molecules, targeting cancer cells for destruction where the laser is pointed. Results The work was carried out at 47 European treatment sites involving 413 men. The chances of the prostate cancer progressing to more a more serious stage were three times lower in the light therapy group, compared to patients without that treatment. “We're going after the tumor to preserve as much of the prostate as we can,” Emberton said, adding that existing therapies target the entire prostate, not just the tumor. Current therapies to treat prostate cancer, including radiation and removal of the entire gland, can lead to lifelong problems, including erectile dysfunction and incontinence. By comparison, urinary and erectile problems following light therapy resolved within three months, with no significant side effects remaining after two years, according to Emberton. The therapy is currently under review by regulators, who are weighing whether to approve it as a new treatment for early prostate cancer.