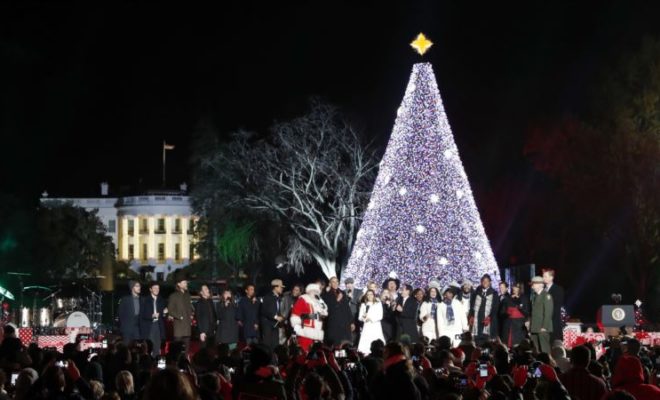 On a cold December afternoon under bright blue skies, visitors to the National Christmas Tree in Washington strolled around carefully manicured paths designed to show off the traditional cone-shaped evergreen tree strung with brightly colored lights. Around the National Christmas Tree ran a toy train that captivated children in the crowd, while the parents admired the lights and the 56 small trees surrounding it. The small trees represent each of the 50 U.S. states, the District of Columbia, and the five U.S. territories: Puerto Rico, Guam, the Northern Mariana Islands, the U.S. Virgin Islands and American Samoa. However, people's reasons for coming to the site, between the White House and the Washington Monument on the National Mall, were varied. Some concentrated on the religious significance of the holiday, while others were there simply to enjoy the festive atmosphere. "For us, if we didn't remember the religious part, [the holiday] wouldn't be significant," said Kim Richeson of Columbia, Maryland. He said he and his wife, Audie Lea, go to a nondenominational church and consider the holiday "primarily religious." But, Richeson added, for those who see the holiday as more of a cultural celebration, a time to be together with family and exchange presents, "to each his own." Kids' enjoyment Also admiring the tree was Paula Mikowicz, also of Columbia, who said she was not religious but was married to a Roman Catholic. She said she didn't mind the religious aspects of the holiday, but her focus was on family. "I've just been a part of it for so long — it doesn't mean anything to me, the religious part of it, but watching the kids celebrate, it's enjoyable," she said. A Pew Research Center poll in 2013 found that 81 percent of non-Christians in the United States celebrated Christmas despite the holiday's founding as a celebration of the birth of Jesus Christ. Eighty-seven percent of people who said they were religiously unaffiliated said they celebrated Christmas. A Pew survey from the previous year found that 76 percent of Asian-American Buddhists and 73 percent of Hindus also celebrated Christmas. Thirty-two percent of U.S. Jews kept Christmas trees in their homes, the 2012 survey found, despite the fact that the Jewish faith celebrates Hanukkah in December rather than Christmas. Overall, in the 2013 Pew survey of about 2,000 people, nine in 10 Americans said they celebrated Christmas. But only about half said they saw Christmas as a religious holiday. Family time "I think it's more of a family holiday," said Carrie DeBlasis of Maryland, who was visiting the National Christmas Tree with her friend Stephen Gregg of Farmington, New Jersey. The two are students at George Mason University in Virginia, and said they looked forward to relaxing with family at the holidays after long months of study. "My family is more religious," said Gregg, "but for me it's more of a family thing, like going back for the holidays after finals and everything. It's just nice being with family." Erdal Dervish and his wife, Asli, who live in McLean, Virginia, brought their young son to see the tree. They were pleasantly surprised to see the electric train, which fascinated their little boy. Erdal is of Turkish origin but grew up in America, and Asli is from Istanbul. "I think in America, there's a pretty big disconnect between [people who celebrate the holiday as a religious one and those who consider it a cultural experience]," Erdal said. "I don't think people really appreciate or understand the religious aspect. … In other countries they celebrate the actual religious aspects of it more closely," he said. "Here, not so much." Mingling traditions But Marilyn Lusk Ault of Frankewig, Tennessee, said her family keeps the focus on religion. "When I quit celebrating Christmas, I will be dead!" she joked. "I will then sing with the angel choir on Christmas Day, celebrating the one for whom the celebration started." She said she carried on the tradition of Santa Claus with her grandchildren, but added, "They usually have a birthday cake for Jesus and sing 'Happy Birthday' … so as not to forget what the true celebration is about." Dan Chrzczonowski of Cleveland, Ohio, said Christmas is a time to celebrate his family's Polish heritage. "For most people of Polish ethnicity, the religious and the cultural are intertwined," he said. "We start by celebrating Advent — a season of preparation, penance and charitable giving — for the period beginning four Sundays before Christmas. We go to Mass on December 8 for the Feast of the Immaculate Conception." He said his family also follows other Polish traditions, like Pasterka, or midnight Mass, at their local church. "There is something so incredibly peaceful and magical about heading out on a cold, quiet night and entering the big, dark church by candlelight. The Polish koledy [carols] are quite beautiful," he said. As for many Americans, Chrzczonowski's holiday celebration will be a mix of traditions, because his wife is Jewish. Their home's holiday decorations include not only a Christmas tree and Advent wreath, but also a collection of menorahs — the traditional Jewish candelabra used to celebrate Hanukkah. And with the first night of Hanukkah falling on Christmas night this year, the extended family — Catholic and Jewish alike — will gather for a celebration of both holidays. In a nation that for years has called itself "a melting pot," that mix of Catholic and Jewish traditions — not to mention immigrant and American — seems perfectly appropriate.