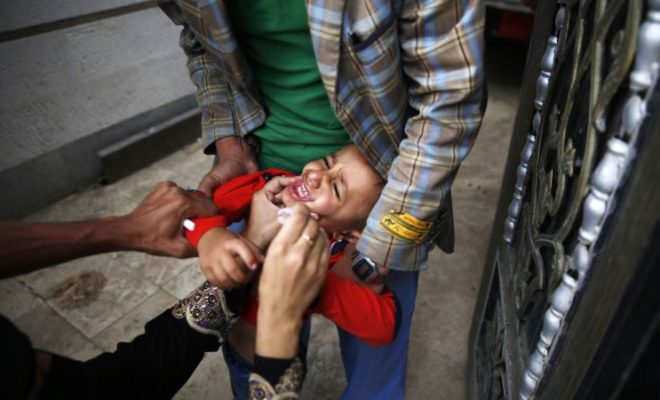 Polio Is Back in Nigeria; Immunization Drive Begins Monday

The polio virus struck Nigeria just as the country was set to celebrate an important anniversary this week – two years of being polio free. Now two children infected by polio are paralyzed for life. The virus attacked in Borno, a northern state that borders Niger, Chad and Cameroon. Borno is where Boko Haram militants have their stronghold. It's also a place where, at times, being a polio vaccine worker is dangerous. Fighting in this area makes it difficult to get all children vaccinated. And in the past, traditional leaders mistrusted vaccine workers. Watch video report: Some vaccine workers were killed, and "that derailed the [vaccination] effort in Nigeria, according to Dr. Muhammad Ali Pate, a former chairman of Nigeria's Presidential Task Force on Polio Eradication. That was a time, less than a dozen years ago, when polio virus from Nigeria was spreading into other parts of Africa. "Nigeria exported the virus to several other countries," Pate told VOA in an interview. Eradication program The physician, who now works in the U.S. with Duke University's Global Health Institute, said the Nigerian task force worked to establish trust with local leaders and parents who were wary of vaccinations. Since then, the polio eradication program has won wide support in northern Nigeria as well as in other parts of Africa's most populous nation. Though now based in the U.S., Pate says health-care workers in his home country have maintained that trust with local communities. He continues to help combat polio in Nigeria through the Chigari Foundation, which he established in 2014 with support from the Bill and Melinda Gates Foundation. As recently as August 10, Pate said he was hopeful that he would still see the end of polio, not just in Nigeria, but in all of Africa, by next year. But then he learned the following day that two new cases of polio were confirmed, and realized than ending the crippling disease in Nigeria will now take at least three more years. "My reaction to this painful setback is that Nigeria should face up to the challenge and address gaps in parts of the North East. Polio can be eradicated, and Nigeria has already demonstrated what it can do if all hands are on deck. The [Nigerian] president should declare this an emergency and lead personally to ensure all children are immunized repeatedly in the affected areas," Pate said in an e-mail to VOA. In fact, the U.S. government is taking action through the Centers for Disease Control, which provides technical support to Nigeria. John Vertefeuille heads the CDC's polio eradication program. In a Skype interview, he said the Nigerian government is set to begin an intense immunization campaign in Borno starting August 15. And while the news of the new polio infections was disappointing, Vertefeuille said it is part of the process of looking very closely at the surveillance – making sure that nothing was missed, and recognizing that sometimes these things do come up. Vertefeuille says the Nigerian government's response to the two new cases has been "fast and strong." Progress made Five entities are involved with the Global Polio Eradication Initiative: The World Health Organization, UNICEF, Rotary International's PolioPlus program, the Centers for Disease Control and the Bill and Melinda Gates Foundation. All have pledged continuing support to the Nigerian government's program to wipe out polio. Despite this week's disappointing news from Nigeria, having only two cases in two years is still significant. As recently as 2012, more than half of all polio cases worldwide occurred in Nigeria. The campaign to eradicate polio throughout the globe is close to reaching its goals. From a time about 70 years ago when polio would kill or cripple up to a half-million people a year, only 23 cases have been reported worldwide so far this year. Most of those are in Pakistan or Afghanistan, and those countries also are making progress in their anti-polio efforts. Pate says the effort to end polio exemplifies what a global partnership can actually accomplish. The challenge is not to let this opportunity slip away.