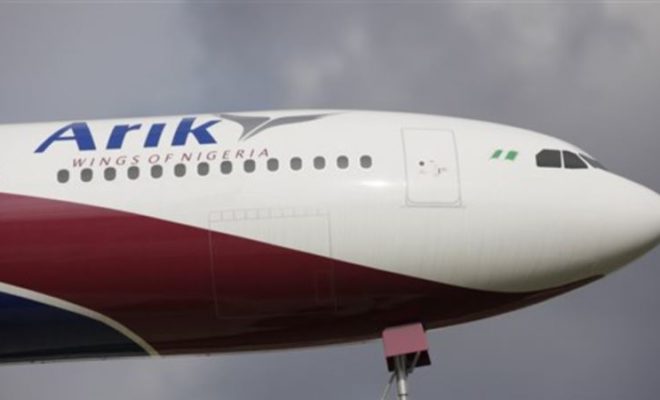 Aviation staff have launched an indefinite strike targeting Arik Airlines, Nigeria's largest carrier, amid a dispute over salary arrears and contracts, three trade unions said. Nigeria is in its first recession in 25 years and earlier this year two other local carriers, Aero Contractors and First Nation, suspended operations amid financial difficulties. In a statement issued late on Monday, the unions said the strike began at midnight (2300 GMT) and would continue indefinitely until demands, including the payment of seven months of salary arrears and negotiations over contract conditions, were met. "All ground handling services, security clearance for Arik Air ticket holders, marshalling, aviation fuel supply, air traffic controls, safety inspection, will be completely withdrawn," said the unions. The statement was issued by the National Union of Air Transport Employees, Air Transport Services Senior Staff Association of Nigeria and the National Association of Aircraft Pilots and Engineers. The impact on services provided by the airline, which flies across Africa's most populous nation and to London, New York and Johannesburg, was not immediately clear. "It is not a strike by Arik staff. The aviation unions stopped our operations," Arik Air spokesman Ola Adebanji said in a text message. He did not elaborate. Arik Air is planning to raise as much as $1 billion through a private share placement next year and then a possible initial public offering (IPO) in Lagos and London, its managing director said in October. Nigerian airlines and international carriers operating within the country have struggled with a plunge in the naira that has made it difficult to remain profitable as most passengers pay in the local currency. International carriers United Air Lines and Iberia stopped services to Nigeria earlier this year, while others have begun refueling abroad to avoid jet fuel shortages. International airlines have complained about the difficulty of repatriating millions of dollars worth of fares sold in Nigeria's local currency.