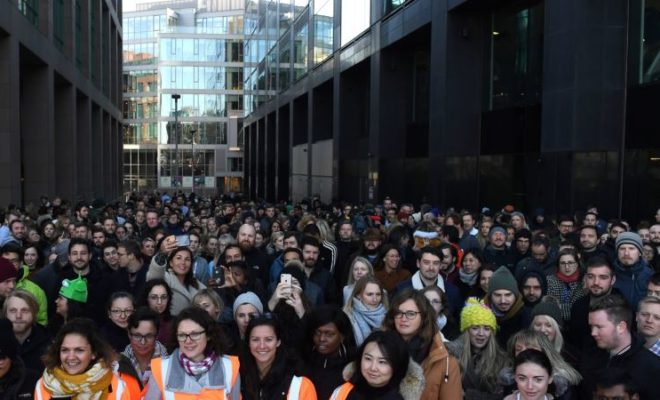 Hundreds of Google employees left their offices Thursday as part of a worldwide walkout protest of the company's handling of sexual harassment cases and its workplace culture. More than a thousand workers and contractors reportedly gathered outside of Google's Mountain View, California, headquarters. Hundreds more, most of them women, are also expected to walk out of nearly two dozen global company offices. "We are a small part of a massive movement that has been growing for a long time," organizers said in an article published in the online magazine The Cut. "We are inspired by everyone from the women in fast food who led an action against sexual harassment to the thousands of women in the #metoo movement who have been the beginning of the end for this type of abuse." The walkouts are the latest indications of employee dissatisfaction that escalated last week after The New York Times reported the internet giant paid millions of dollars in severance pay to male executives accused of harassment without disclosing their wrongful acts. The Times reported that Google paid $90 million in 2014 to then-senior vice president Andy Rubin after he was accused of sexual harassment. Rubin denied the allegations in the article, which Google did not dispute. The report energized a months-long employee movement to improve treatment of women and minorities and increase diversity. The movement earlier this year included petition drives, meetings with senior executives, and training from the workers' rights group Coworker.org. Organizers demanded late Wednesday that Google parent Alphabet Inc. add a worker representative to its board of directors and internally disclose pay equity information. Employees also asked the company to revise their human resources practices to make the harassment claims filing process more equitable. Google CEO Sundar Pichai said "employees have raised constructive ideas" which the company will turn "into action." Dissatisfaction among Alphabet's 94,000 workers and tens of thousands of contractors has not adversely affected the company's share price. But employees have said they expect Alphabet to have recruiting and retention problems if the problems are not adequately addressed.