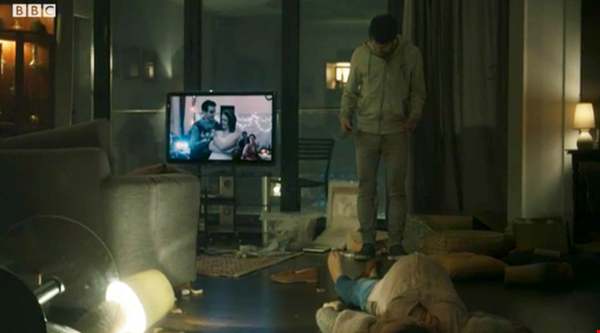 The first episode of new four-part BBC thriller One Of Us had viewers completely hooked from the start.

The first few graphic scenes showed a murdered pregnant newlywed couple sprawled out on the floor of their Edinburgh flat while a creepy man stood over them – and people on Twitter knew they definitely wouldn’t be turning off (even if they were mildly terrified).

I'm going to be hiding behind the sofa aren't I? #OneOfUs

17 minutes in and I'm hooked already. That was one of the best starts to a series I've seen in a while. #OneOfUs

They were also desperately trying to keep up as we met lots of characters – including some familiar faces such as Juliet Stevenson and even Chris (Joe Dempsie) from Skins.

Trying to keep up with who's who #OneOfUs

Chris from Skins seems to have got into a bit of a pickle :/ #OneOfUs

There were a few laughs at how much of a dead ringer John Lynch was for Eric Cantona.

Good to see Eric Cantona getting a role in #OneOfUs

Why is Eric Cantona a lead role in this? #OneOfUs

The plot certainly began to thicken when the guy who appeared to be the robber and killer was in a car accident right outside the murdered woman’s parents’ house – and they looked after him not knowing who he was.

Though people weren’t convinced that was all that believable and have been trying to guess how it ends already.

Unless its a huge plot twist but finding it very far fetched that the murderer ends up at the family homes of his victims…..#OneOfUs

The "killer" stole his victims watch and wore it to go to the family house, harsh.ð #OneOfUs

I think, I THINK!!!! that this killer guy was HIRED by one of the family and was coming to get his payoff or make threats ðð¤ðð¼ #OneOfUs

Bet it turns out one of them in the family killed the couple because that man would be dead by now! #OneOfUs

They’ll have to tune in again next week to find out.