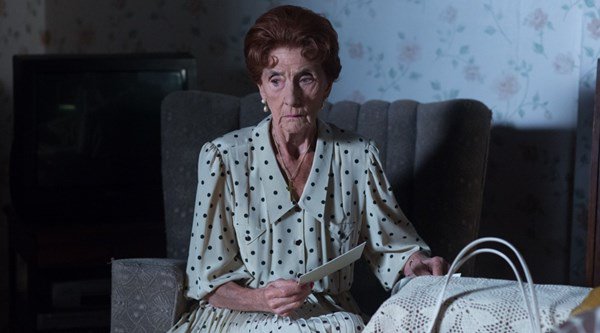 EastEnders viewers were left shocked over Dot Branning’s gay marriage comments as her old pal returned to the soap.

Dot, played by June Brown, told openly gay Sonia Fowler that she would not be attending the wedding of her longtime friend Colin Russell, who is gay.

Dot said: “Iâve been invited to a friendâs wedding. I canât go. I want to go but it isnât right. They shouldnât be getting married.”

She added: âLook I got an invitation and I thought about it and I decided no and I donât want to talk about it anymore.â

Colin then showed up and declared that he planned to escort Dot to the wedding, telling her: âHello Dot. I had a feeling you might not turn up unless I came for you.â

I fully expect Colin to turn up tonight to tell Dot, 'You were right, being gay is a sin and I've given myself to the Lord'. #EastEnders

The same people shocked over Dot's homophobia last night in #Eastenders, are the same who freaked about the gay kiss in #CoronationStreetð´

Some fans think there might be a storyline in the works in which Dot changes her ways.

Is this going to be a two episode plot-arc when Dot goes from anti equal marriage to pro by Friday? #EastEnders

Some viewers speculated this was leading up to a story about Dot’s mental health.

Oh poo, Dot has been given the Alzheimer storyline hasn't she? It's gonna be a tough year ahead on #Eastenders

Has Dot got dementia? #EastEnders

Other viewers were just delighted by the return of Lord Cashman to the soap.

If @mcashmanCBE being reunited with Dot Cotton isn't a reason to watch Eastenders then I don't know what is!

Lovely seeing Colin back in, especially with Dot #EastEnders @mcashmanCBE

@mcashmanCBE wow what a nice surprise to see Colin bk last night on #EastEnders. Bk 4 Gud or just a fleeting visit to Dot? 🙂

EastEnders airs on BBC One.