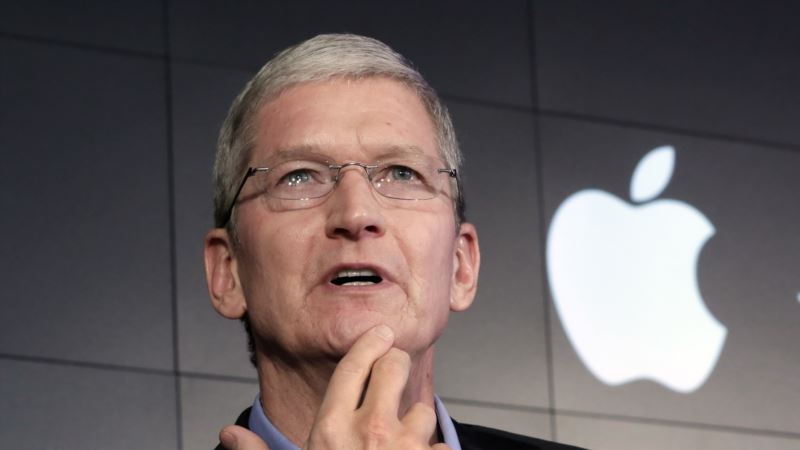 Tim Cook, Apple’s chief executive, called a recent tax bill handed to the company by the European Union “total political crap,” and claimed that a bias against the U.S. led to the decision. In an interview with the Irish Independent Thursday, Cook vowed to stand with Ireland to fight the ruling and said it had “no basis in law or fact.” "It's total political crap," he told the paper. "They just picked a number from I don't know where. In the year that the Commission says we paid that tax figure, we actually paid $400 million. We believe that makes us the highest taxpayer in Ireland that year." Cook’s comments come two days after the EU's antitrust regulator ordered the technology giant to repay Ireland $14.5 billion in back taxes, saying the world's most valuable company received an unfair tax break from Dublin and managed to avoid almost all corporate taxes across the 28-nation bloc for more than a decade. The EU's competition commissioner, Margrethe Vestager said, "Tax rulings granted by Ireland have artificially reduced Apple's tax burden for over two decades, in breach of the EU state aid rules. Apple now has to repay the benefits." She questioned how anyone might think that Apple's 2014 Irish tax rate of 0.005 percent was fair. Cook denied that his company received any special treatment, though, and said Apple would win the case on an appeal. He called the ruling “politics at play” and accused the EU of overreaching in an effort to change tax laws across the whole of Europe. "There are other possibilities too, but I think it's clear that there is a desire to harmonize tax rates across the EU. Doing it this way doesn't seem like the right approach to me. There should be a public discussion about it," he said. Cook went on to say he believes Apple was targeted because it is a U.S. company operating in Europe, and “people in leadership positions in several countries” told him as much. “But what I feel strongly about is that this decision was politically based, of that I'm very confident,” he said. “There is no reason for it in fact or in law." In Washington, U.S. officials seemed to agree with Cook and voiced their disappointment in the decision. White House spokesman Josh Earnest said U.S. taxpayers could eventually bear the brunt of the decision, if Apple is forced to make the payment, because the company then could deduct the billions its pays Ireland from the U.S. taxes it owes. "We are concerned about a unilateral approach," Earnest said, adding that it "threatens to undermine progress that we have made collaboratively with the Europeans to make the international taxation system fair" for both taxpayers and companies. The U.S. Treasury called the ruling "unfair, contrary to well-established legal principles." The technology giant, the maker of the popular iPhones, was able to legally funnel its international sales revenue through Ireland in order to lower its tax payments; however, the commission ruled that European law makes it illegal for a company to receive state tax aid, and would require Apple to pay back Ireland for the tax breaks it received. Vestager said that Apple illegally benefited from a tax deal with Ireland that no other business received. “Member states cannot give tax benefits to selected companies – this is illegal under EU state aid rules,” she said in a statement. “The commission's investigation concluded that Ireland granted illegal tax benefits to Apple, which enabled it to pay substantially less tax than other businesses over many years." Apple took all of its profits from European sales and recorded them in Ireland. From there, the majority of Apple’s European profits were allocated to a “head office” within the company that had no physical presence or employees in any country. Only a small fraction of Apple’s profits was allocated to its “Irish branch” so only those profits were taxed by Ireland. That allowed Apple to pay just over $11 million in corporate taxes in 2011 – an effective tax rate of less than 1 percent. In the following years, Apple’s profits continued to increase, but its tax payments continued to decrease. In an interview Thursday with Irish radio station RTE, Cook said the company will most likely repatriate billions of dollars in global profits back to the U.S. next year, though he didn’t specify how much, exactly, would be returned. "We paid $400 [million dollars] to Ireland, we paid $400 [million dollars] to the U.S. and we provisioned several billion dollars for the U.S. for payment as soon as we repatriate it and right now I forecast that repatriation to occur next year," Cook said. A study published last year showed that Apple had more than $181 billion worth of profits stashed in offshore accounts – a move some critics say helped Apple avoid paying U.S. taxes. The European Commission ruling marks Europe’s largest-ever tax penalty – though Irish Finance Minister Michael Noonan immediately indicated the country will appeal the ruling. "The decision leaves me with no choice but to seek Cabinet approval to appeal the decision before the European courts," Noonan said in a statement. "This is necessary to defend the integrity of our tax system, to provide tax certainty to business, and to challenge the encroachment of EU state aid rules." Last month, the U.S. Treasury Department criticized the European Commission, accusing it of unfairly singling out U.S. companies for punishment under its “new approach” to dealing with legal tax breaks given to multinational corporations operating within its member states. The commission denied that it is targeting U.S. businesses, and instead said that EU rules ban member states from offering tax breaks that are not available in other European countries. "This is a standard feature of EU state aid rules," the commission said in a statement.

In Final Push, Trump and Biden Campaigns Reach Beyond Their Base of Support for Votes