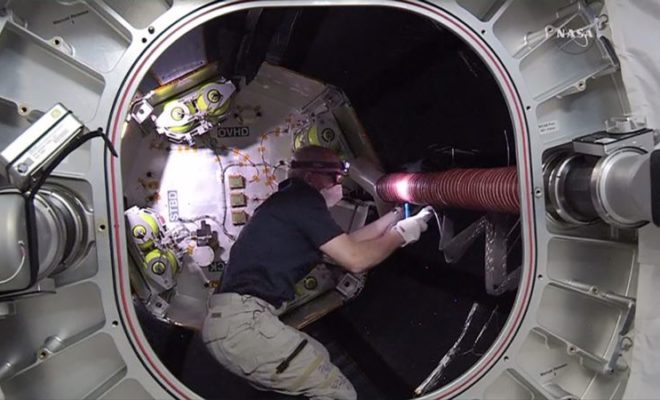 A U.S. astronaut and two Russian cosmonauts wrapped up a 172-day mission aboard the International Space Station with a parachute descent and landing at dawn Wednesday on the steppes of Kazakhstan, a NASA TV broadcast showed. The capsule made a parachute descent southeast of Zhezkazgan, disappearing into a layer of haze as it neared the ground. It was several minutes until NASA could confirm the landing at 7:13 a.m. local time (9:13 p.m. EDT on Tuesday/0113 GMT on Wednesday). Station commander Jeff Williams, with the U.S. space agency, and flight engineers Alexey Ovchinin and Oleg Skripochka, both with Russia's Roscosmos agency, pulled away from the space station at 5:51 p.m. EDT/2151 GMT as the ships sailed 258 miles (415 km) over eastern Mongolia, said NASA mission commentator Rob Navias. "I will certainly miss this view!" Williams tweeted earlier Tuesday, posting a picture of sunlight glinting off the planet. "Vast gratitude toward my crewmates, ground teams, supporting friends, and family," Williams added. The mission's end came as a U.S. space probe was cleared for launch Thursday to collect and return samples from an asteroid in hopes of learning more about the origins of life on Earth and perhaps elsewhere in the solar system, NASA said. Williams, 58, returned to Earth with a career total of 534 days in orbit, more time than any other astronaut in U.S. history and 14th in the world. The Russians remain champions of long-duration spaceflight, with cosmonaut Gennady Padalka currently the world record-holder with 878 days in space over five missions. Before leaving the station, Williams turned over command of the $100 billion outpost, a project of 15 nations, to cosmonaut Anatoly Ivanishin, who remained aboard the station with NASA astronaut Kate Rubins and Japan's Takuya Onishi. "We'll be missing you here," Ivanishin said during a change-of-command ceremony Monday. "Have fun riding though the atmosphere … and have a very safe and exceptionally soft landing." A replacement crew is due to launch on September 23 from the Baikonur Cosmodrome in Kazakhstan.