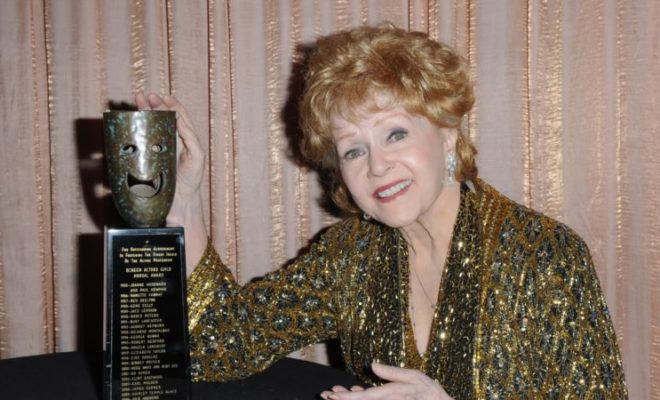 American actress Debbie Reynolds died Wednesday after suffering a stroke, just one day after her actress daughter, Carrie Fisher, passed away. The 84-year-old Reynolds was stricken in the afternoon at the home of her son in the western city of Beverly Hills, California. The legendary actress was hospitalized a short while later after paramedics were called. Reynolds’ son, Todd Fisher, confirmed her death to various news media outlets. “She wanted to be with Carrie,” Fisher was quoted as saying. “She’s now with Carrie, and we’re all heartbroken,” he said from Cedars-Sinai Medical Center in Los Angeles, where his mother was taken by ambulance. He said the stress of his sister’s death “was too much” for Reynolds. Reynolds starred opposite Gene Kelly in the 1952 classic movie Singin’ in the Rain, and was nominated for an Oscar for her role in the musical The Unsinkable Molly Brown. She also was nominated for a Tony Award in 1973 for her performance in the Broadway musical Irene. She received an honorary Oscar in 2015, the Jean Hersholt Humanitarian Award, but was too ill to attend the ceremony. Her granddaughter, actress Billie Lourd, accepted the statuette in her honor. Reynolds was recognized for her decades-long commitment to various charities, including the mental health organization she founded, the Thalians. Born in the southern city of El Paso, Texas, Mary Frances “Debbie” Reynolds was married three times. She had two children with the late singing star Eddie Fisher, who left her for actress Elizabeth Taylor. Fisher, who starred as Princess Leia in the original Star Wars movie trilogy, died Tuesday at age 60, days after suffering a medical emergency on a flight from London to Los Angeles, California. In a November interview broadcast on the NPR radio program Fresh Air, Fisher spoke of her admiration for her mother, who she said had some recent health setbacks. “She’s an immensely powerful woman, and I just admire my mother very much,’’ Fisher said. “There’s very few women from her generation who worked like that, who just kept a career going all her life, and raised children, and had horrible relationships, and lost all her money, and got it back again. I mean, she’s had an amazing life, and she’s someone to admire.’’ Reynolds and Fisher appear together in a documentary that premiered at the Cannes Film Festival in France earlier this year. Bright Lights: Starring Debbie Reynolds and Carrie Fisher is set to air on the Home Box Office movie channel in early 2017.